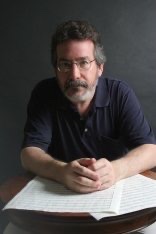 My friend and colleague David Froom, who passed away on June 19th, 2022 after a months-long struggle with cancer, was one of the finest composers I’ve ever known. I had just seen him for the first time in several years this past February, when clarinetist Narek Arutyunian and Riverside Symphony, conducted by George Rothman, gave the New York premiere of his exquisite Canzoni di Notte. His honors, to name just a few, include a fellowship to Tanglewood, a Guggenheim fellowship, two awards from the American Academy of Arts and Letters, a Fulbright grant which afforded him the opportunity to study with Alexander Goehr at Cambridge University, awards and commissions from the Koussevitzky, Fromm, and Barlow foundations, and a first prize in the Kennedy Center Friedheim Awards. He received degrees from UC Berkeley, USC, and finally, Columbia University, where he was in the process of finishing his DMA when I met him at Tanglewood in the summer of 1981. His distinguished teachers included William Kraft, Humphrey Searle, Robert Linn, Chou Wen-chung, and Mario Davidovsky. David himself was also a distinguished teacher, having taught composition and theory at the University of Utah, Peabody Conservatory, the University of Maryland College Park, and, from 1989 until his death, St. Mary’s College of Maryland, where he was beloved by his students and colleagues. His wife, the amazing pianist Eliza Garth, who’s been a good friend to me over the years as well, and their two daughters, Rosalie and Ana, survive him.

David was everything I aspire to be as an artist and human being: his music is strong, dramatic, passionate, and lyrical, and its expressive range is broad and deep; it is music that is truly generous to its hearers. The first music of his that I heard, which he shared during a morning seminar for the fellowship composers at Tanglewood, was this Piano Sonata from 1980; its intensity never flags, his technique and handling of form are completely assured, and the piece absolutely bowled me over. Many years later, in 2019, he wrote a very different kind of solo piano work, a set of Variations on an Early American Hymn Tune (Holy Manna), dedicated to Eliza, demonstrating the expressive range I mentioned above. Like Aaron Copland, a composer he admired, David could write fluently in more than one idiom, but his consummate craft, taste, respect for his audience, and his personality as a composer are always in evidence, regardless of the relative simplicity or compexity of the musical materials under consideration. Here is a small sampling of David’s versatility in a variety of mediums:

David was one of the first people I met when I arrived at Tanglewood, and from the get-go he was kind, helpful and encouraging to me, as he was to so many others. Coming from a small town in Arkansas, I had mostly been the proverbial big fish in a little pond, where I stood out in part because I had known from the time I was ten that I wanted to be a composer. A prominent local supporter of the arts lived near my hometown, and she told me that if I could get accepted into Tanglewood that she would assist me financially. It seemed like a dauntingly big “if,” but I thought, why not? I cringe when I recall what my handwritten application must have looked like to Gunther Schuller, and unlike David and my other colleagues who also had been accepted, I certainly had no large-scale works, impressive awards, or other noteworthy achievements to my name. Nevertheless, I sent it in and tried not to think about it too much.

To my utter amazement I did get in, and found myself for the first time in the heart of the classical music world in the U.S, studying with Mario Davidovsky, a composer and inspiring teacher whose work I recently had come to greatly respect and admire. It was, to say the least, a heady experience; I was meeting many contemporary music luminaries, and I think David probably sensed that I felt rather awkward and ill at ease as I tried to locate my bearings in this new environment. He did all he could to help me feel that, regardless of my insecurities, I really did belong there. He also encouraged me to apply to the DMA program at Columbia to continue working with Mario, which I did. Once again I got in, and a new and very exciting and stimulating chapter of my life began in New York City. S0 I owe you big time, David; I’ll never be able to thank you enough.

Recently Eliza and David had bought a place in Westchester, close to where Susan and I live, and I was greatly looking forward to seeing them both on a more frequent basis, which makes me even sadder about this. I miss you, David. You made a big difference to a lot of people, most assuredly including me. Rest well.