I’m back! News and a recent video of my Symphonia brevis

Hello, everyone! My last post here was over two years ago, in January of 2016. All I can say is that life and work intervened in myriad ways to prevent me from keeping in touch on here as much as I would have wished. A number of good things have occurred since 2016, and many challenges have presented themselves as well. In several significant ways the period since last I posted here has also been a season of significant personal losses.

Foremost among these was that of my mother-in-law Lois J. Orzel, on May 9, 2017. When I first showed up in Binghamton with Susan in 1996, Lois, along with my father-in-law George, welcomed me into the family more graciously than I ever could have hoped or imagined. Losing Lois has been a tremendous blow to us all.

A couple of months earlier, on March 10, 2017, Dr. Henry S. Lodge, my physician for nearly 25  years, the man who set me on a path to a healthier way of living and made me love exercising, quit this earthly plane much too soon.

On February 26, 2017 our beloved cat Fritz, as sweet, funny, and lovely a creature as has ever existed, succumbed to lymphoma. He was about 14 years old. 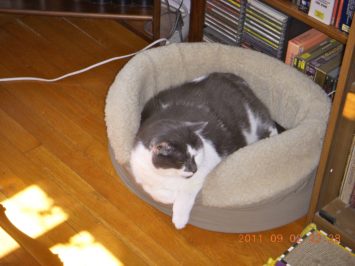 Fritz in his bed in the living room

On February 24, 2018, N. Stanley Balch, the band director for many years at Central High School in my hometown of Helena-West Helena, Arkansas, passed away at the age of 80. Though officially I was not a member of the band (I was a choir geek, not a band geek), Mr. Balch encouraged my musical pursuits, and in his little recording booth in the band room he had an interesting and varied library of LPs, from which he generously allowed me to borrow. In that collection I first encountered music by Thelonious Monk and John Coltrane, among many others, and bit by bit began to learn more about how instruments and orchestration work. There was, however, just a bit of a quid pro quo: when needed, I was pressed into service in the percussion section of the concert band, where I unsuccessfully attempted to impersonate an actual timpanist in pieces by W. Francis McBeth and Vincent Persichetti. Much more within my comfort zone, I also played the Fender Rhodes electric piano in the stage band.

In 1975, when I was a Freshman at Southwestern at Memphis (now Rhodes College), I met Ed Sharp, whose voice lessons I was accompanying in the studio of my voice teacher at the time, Diane McCullough Clark. Ed’s wife, Ann Sharp, whom I met soon after, was by day a school psychologist, but also a wonderful actress and singer, a lovely, kind, talented, and funny lady who over the years performed many leading roles at Theatre Memphis; she, alas, also left us much too soon, on June 9, 2018. She and Ed were dear friends of Tony Lee Garner, an important mentor from my Southwestern days, himself gone twenty years now, under whose direction Ed, Ann and I often sang. I’m grateful that I got to visit briefly with Ann in the summer of 2016.

And mere days ago, I, along with the rest of the contemporary music community, was greatly saddened to learn of the loss —again much too young — of a great composer, conductor, musical citizen, and friend, Oliver Knussen, on June 9, 2018. Olly, whom I had met at Tanglewood when I was a composition fellow there in 1981, was not only — hands down — one of the most brilliant musicians that I have ever met, with an encyclopedic knowledge of vast amounts of repertoire in a broad range of styles, he also was very kind and encouraging to me, and I’ll forever be grateful to him for pointing me toward much fascinating music that might otherwise have escaped my notice.

All of this loss in such a brief period has, to put it mildly, sucked. And of course, the fallout from the 2016 election that preceded these losses has only exacerbated the overall suckitude.

Even so, there still are plenty of things that manifestly have not sucked at all, in any way, shape or form, things that have been very positive indeed, to wit:

Susan and I will have been married for twenty years this coming January.

It has been almost 26 years since I began teaching at Manhattan School of Music, and I’m thankful to begin another year there in September.

I got to have all those people I just listed above in my life for a time, a pretty substantial amount of time for the most part, though, for the record, they all left too damn soon, as far as I’m concerned.

I have a recording consisting entirely of my music coming out in October. The company is PARMA Recordings LLC, and the label is Navona. It contains music encompassing the period from 1989 to 2015, including solo pieces, ensemble works, and choral music. I’ll have more to say about that later on, as the time draws nearer. Anyone reading this who will be in New York City or its environs is welcome to a release party at the lovely Tenri Cultural Center on the evening of Wednesday, November 7, 2018, from about 8:30 until 10:30. There will be food, libations, and a couple of live performances by people featured on the album.

I wrote three piano preludes that I like quite well, all based on lines from poems, that were commissioned by pianist and composer Thomas Stumpf; Thomas has premiered the first two and who will premiere the third one on October 7, 2018 at Tufts University, where he is on the faculty.

I have other projects going that I will talk about later on, including a new work for The Megalopolis Saxophone Orchestra, under the direction of Andrew Steinberg, who also played my solo tenor saxophone piece The Trill Is Gone for my recording.

I continue to enjoy greatly singing with and composing for C4. This past season I wrote a new piece for the women of C4, called who are you?, on a poem by Zsuzsanna Ardó, which was conducted by my friend and colleague Timothy Brown.

And then there’s this, with which I will leave you: The Orchestra of the League of Composers gave the second ever performance of my Symphonia brevis in Columbia University’s Miller Theatre on May 20 of this year. Louis Karchin did an outstanding job of preparing and conducting it, the players were stellar, and I was in the best possible company with three distinguished composer colleagues: Samuel Adler, this year celebrating his 90th birthday, John Harbison, 80 years old this year, and Du Yun. The four of us were interviewed on stage by another distinguished composer colleague, Robert Sirota. It was a fantastic evening of music, and I was delighted to be included.

Please enjoy, and I’ll look forward to updating you all, I hope on a more frequent basis!