The Christmas Card Project – History and This Year’s Installment

On January 6 I completed this year’s holiday greeting, a bit late by most people’s reckoning, I suppose. Had I finished it this past Saturday, I would at least still have been safely, albeit barely, within the season of Christmas. As it is, it is more of a New Year/Epiphany greeting, and I’ll have to be content with having gotten it done sufficiently in advance of Ash Wednesday.

In any case here is a link to this, my first opus of 2013, which I hope you all will accept with my thanks and best wishes for a Happy New Year:

Hayes Biggs: I Heard the Bells on Christmas Day

This year’s offering is a short, chorale-like piece, a setting of  the first stanza of the poem “Christmas Bells,”  written during the American Civil War by Henry Wadsworth Longfellow (1807-1882). When I was growing up it was sung in our church every year (Hymn 78 in the 1956 Baptist Hymnal) at some point during the Christmas season, set to a tune called Waltham, by one John Baptiste Calkin (1827-1905).

This is the latest in a series of such musical salutations, going back many years. My first musical Christmas card, written in 1988, was a reharmonization of Gustav Holst’s tune Cranham, best known as a setting of  Christina Rossetti’s “A Christmas Carol” or, more familiarly, “In the bleak midwinter.”  My version may be found here: Midwinter. It didn’t look nearly this good initially, having been created not with Finale or Sibelius, but rather with the first notation software I ever used, the grossly misnamed Professional Composer, which some of you, along with me, alas, are old enough to recall. I cringe now as I remember choosing red paper for making the copies of my card that I intended to distribute, a choice that really did little or nothing to improve the look of the thing.

The impetus for writing a musical holiday card came from my friend David Hurd, Professor of Church Music and Organist and Director of Chapel Music at The General Theological Seminary, as well as Organist and Music Director at the Church of the Holy Apostles. In 1988 David was the Organist and Director of Music at All Saints Church, an Episcopal parish on New York City’s East Side, where I was a member of the choir from 1985 until 2002. David has had a tradition for some years now of writing a piece during Advent that doubles as his personal Christmas greeting to friends and family. He maintains that tradition to this day, and I am pleased to have remained on his recipient list. During the time David and I were at All Saints, each of us in the choir received his card — usually on Christmas Eve at our final rehearsal before the service — along with various delectable sweet treats and small bottles of liqueur. Over the years his cards ranged from short canons and choral works on seasonally appropriate texts to brief pieces for recorders. (In addition to his prodigious talents as composer, organist and liturgical musician, David is an accomplished performer on the recorder and his home contains an impressive array of various sizes and ranges of that instrument.)

Prior to 1988 I really hadn’t been all that keen on sending out Christmas cards of any sort, but by December of that year I found myself increasingly drawn to the idea of a musical holiday greeting, and so it was that I first appreciated and subsequently appropriated David Hurd’s custom, keeping it going for a good twenty years. One reason for my adoption of this practice back then seems obvious to me now, though I don’t recall if it did then; my mother had passed away just a few months earlier, in June, and doing this was a good way for me to connect to other people, something I really needed to find a way to do at the time. It also occurs to me now — again, not remembering if it registered with me in 1988 — that, for my first attempt at one of these greetings, I chose my mom’s favorite Christmas hymn. One of her prized recordings was an LP (issued by Word Records) of religious songs sung by a tenor named Claude Rhea, who I believe went on to become something of a bigwig in Southern Baptist educational institutions. He really was quite a fine singer, I must say, and on this record, entitled Majestic Themes, I can remember there being — along with skillful but somewhat overblown orchestrations of many of the old chestnuts frequently offered up as church solos in an earlier era (“I Walked Today Where Jesus Walked,” “Eternal Life,” etc.) — a rather nice, simple and tastefully done arrangement of Holst’s melody that was one of my mother’s favorite cuts on the album. The arranger and conductor was Paul Mickelson, who led an ensemble called the Concert Orchestra of London — more like the Pickup Orchestra of London, I suspect, but no matter, it was a good band. (Odd indeed are the sundry details one can remember from so long ago.)

My musical holiday missives have varied in length, ambition, language and instrumentation over the years. Early on I focused on a cappella settings of liturgical Latin texts. O magnum mysterium, which I wrote about in my last post, began its existence as a Christmas card piece. I only had a bit of it ready for my 1989 greeting, but completed it the following year. Not long after that I resolved that I only would send out pieces that I could consider complete, regardless of how brief they might be.

C. F. Peters published O magnum mysterium in 1992. My greetings from 1994-1997 ended up in a collection brought out by them in 1998, the first time (I believe) that they had printed any choral work with a fancy multicolored cover: 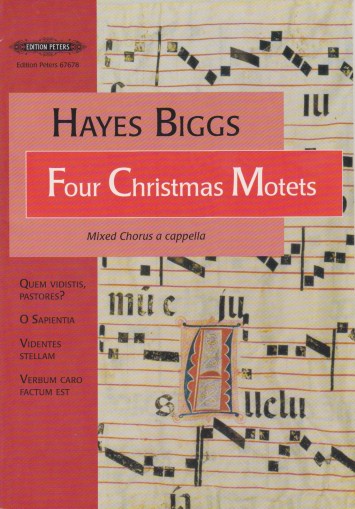 Before long I found myself switching to setting poetry in English — Middle, Modern and points in between:  Balulalow (excerpt). Soon after I began adding instruments: Nova, nova (excerpt). I made sure that all subsequent pieces using instrumental support would fit into the same overarching large ensemble: 2 flutes (including alto flute), 2 oboes (including English horn and oboe d’amore), cello, harp and percussion. That way, if I ever were to have an opportunity to present some or all of them in a concert or on a recording, there would be a modicum of practicality to the orchestration, which would mostly involve various subsets of the entire group. Several of the pieces include vocal soloists; here, for example, is one that includes a solo baritone, treble chorus, alto flute, oboe d’amore and cello: I synge of a mayden (excerpt). In it I quote a passage from Pérotin’s Ex semine. A few years later I wrote another piece for baritone solo with treble choir, this time with harp,  on a poem of Thomas Hardy, incorporating part of Victoria’s O magnum mysterium: The Oxen (excerpt). There even are a couple of pieces in Spanish, including this one for male chorus, cello and harp, dedicated to the memory of my high school Spanish teacher, Charleen Hickey: En Belén tocan a fuego (excerpt). Most of these pieces other than the Peters publications mentioned above are available through APNM (Association for the Promotion of New Music).

In December 2009 I was very busy trying to finish Symphonia brevis, an orchestral work for the Riverside Symphony, the premiere of which was slated for February of 2010. Between pushing against a deadline and the end of a very busy fall semester there simply wasn’t time or energy to find an appropriate text and follow through with its setting. This hiatus from my annual Christmas pieces wound up lasting until New Year’s Day of 2012, when I finally managed to eke out the time to complete a new one, returning to an unaccompanied setting of a Latin liturgical text for the first time in years: Mirabile mysterium (excerpt). This year I came, in a sense, full circle: another favorite Christmas song of my mom’s was “I Heard the Bells on Christmas Day.” I imagine she would be at the very least somewhat puzzled by my musical setting — Waltham it ain’t — but know she could relate to the text of the hymn she loved.

Once again, have a happy and healthy 2013, and thanks for reading!